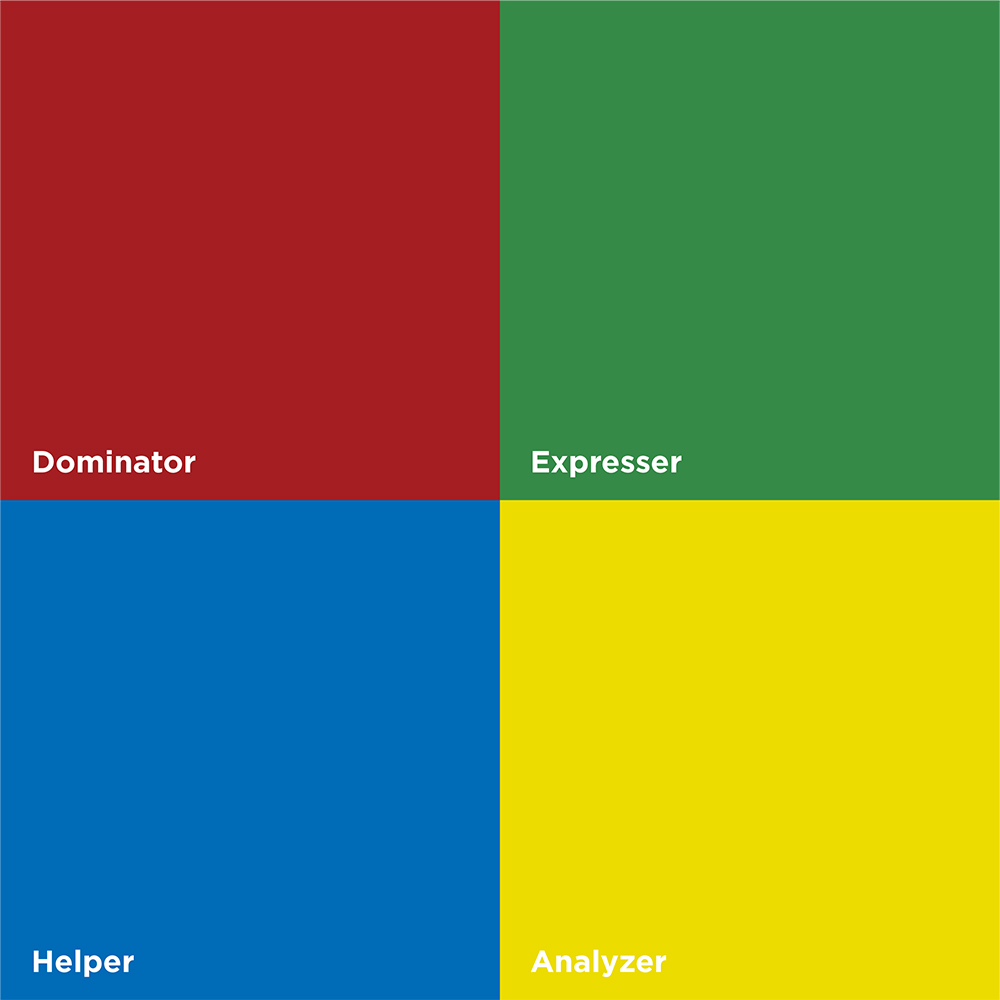 Which Color Personality Are You?

There are many different personality tests and they vary widely in depth, function and analysis. A couple basic things they all have in common is that they can teach us to better understand others’ personalities and be equipped in adapting to each personality type.

When I started at Caliber earlier this year, I wanted to get to know everyone a little better so I could more quickly and effectively become a productive member of the team. I had taken a few personality tests in the past and one of them stuck out to me as being easy to understand – the color personality test. I figured everyone here could relate to colors, right?

Along with getting to know everyone better, my other goal was to help improve communication and teamwork. I planned to do that by identifying everyone’s color personality, helping everyone understand personality differences amongst team members and determine if the team was too heavy or too light in any areas.

We found that we have a pretty good mix of personalities at Caliber. Now that we are all aware of each other’s color, we are better equipped to handle our internal diversity, work more efficiently and communicate accordingly. We have even decided to include our color personality test in our new hire process to help new team members get up to speed with everyone’s personalities quicker. It was a fun exercise and definitely worth doing.

The following are descriptions of the four different color personalities and which single color each of our team members most identify with.

The red personality is generally considered the “dominating personality”. They sometimes have low tolerance for undisciplined and devil-may-care attitude which oftentimes put them at odds with the green personality. If faced with a stressful situation, the red personality would generally seek out strenuous activities like running or boxing to vent out his or her frustrations.

Reds are very results focused. They sort the world for how to get things done in the quickest way possible. Awesome for sales and getting things done quickly. Logical, practical, and do not display emotions easily. They desire structure, and seek control of both their environment and people, often experienced by others as aggressive, overbearing and dominant. They are punctual and may become irritated if they think their time is being wasted. A natural leader, they are driven by the need for power and control.

If they had to put a swing set together, they would hire someone to do it for them.

The green personality is generally regarded as the sunniest personality. The office talkers. Often you will find them the life of the party. Highly social and inspiring. Most of the time they are the loudest and most vocal of the four types of color personalities. Greens are self-confident personalities who will challenge anything and everything like authority, rules and established ways of thinking. This tendency to question everything can create a strained atmosphere in both business and personal situations. They are interested in innovations and change.

Some would regard them as the happy-go-lucky type who seems unable to take anything seriously. The green personality treats life as if it’s one big, continuous party. If faced with a stressful situation, the green person would seek out friends and talk it out. Most green personalities fear rejection most.

If they had to put a swing set together, they would invite their friends over for a barbeque while they build it.

The blue personality is generally referred to as the calm personality. They don’t easily get frazzled and are the epitome of calmness even in most stressful situations. To them also falls the role of mediator when faced with sticky situations. When stressed, the blue’s approach is to sleep it off. The blue personality tries his/her best to maintain harmony in all types of situation. Because of the blue’s inability to say no, people oftentimes take advantage of them. Blues will put people before everything else and are great at relationships. They care about harmony.

They focus on helping, supporting and making a difference in other people’s lives. The other colors may get easily frustrated with a blue as they tend to move slowly, need a lot of affirmation and direction. Blues are very loyal though, definitely someone you want for the long term. A strong blue lives in a world of intangibles where hopes, dreams and emotions are most important. Blues look at the big picture, are not detail-oriented, and like to explore possibilities and alternative ways of doing things. Blues have a vivid imagination and thrive in an atmosphere that encourages the use of creative abilities and talents.

If they had to put a swing together, they would design and build their own swing set.

Always focuses on the facts, data and methodology. Leads with a lot of rational thinking, others can experience them as cold, aloof or overly reserved. Yellows are awesome for managing complex projects. Yellows use their five physical senses to access information. They are polite, cooperative people who seek to create conflict-free surroundings. Highly developed power of observation.

If they had to put a swing set together, they would pull out the directions, carefully count and arrange all the parts, and then systematically build the swing set.